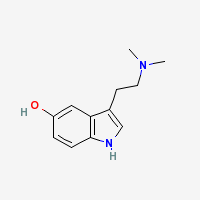 Brief overview - What is Bufotenine?

Bufotenine (5-HO-DMT) is a psychoactive alkaloid found in several plants and animals, also in humans. It is known specially for it's presence in the skin and venom of some toads (Bufo species, hence the name BUFOtenine)

Bufotenine can be oxidized (naturally or with the use of hydrogen peroxide), and becomes Bufotenine N-Oxide

as a snuff or when smoked. ref Trout's Notes

reference (# 14) for the statement. The only paper of Holmstedt (#6 in their list) that they list is Holmstedt's analysis of Seitz's Epena snuff. [i.e. Holmstedt 1965). At no point during that particular study did Holmstedt analyze plant material of Virola sebifcra and detect this compound. Ref Trout's Notes