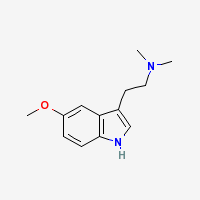 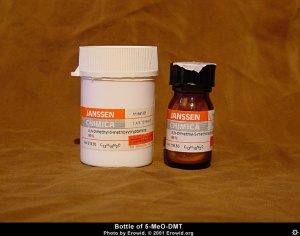 Brief overview - What is 5-MeO-DMT?

Medium doses (7-15 mgs smoked) - Crushing body load yielding gasping and gagging nausea with any resistance and a sort of release into the 5-MeO state with surrender - beyond body-orgasm into gasping soul orgasm. CEV's show a sort of yellow or white field. Eyes want to open and close. Open eye visuals are best with living, loved ones. Fractalized in space and time. Peak effects 20-40 mins. Total time to full baseline 1.5-2.0 hours.

Higher doses (16-22 mgs smoked) - Body load that hits like a wall of drowning whiteness. Overwhelming. No time to resist or submit or feel nauseaus or groan or . . . Blackout for peak memories. Weird verbal outbursts or babbling. Extended peak effects, 20 mins to over an hour. Total time to baseline 2 hours to . . . . extended feeling of not being fully back or integrated that can last days, weeks or months.

It is worth noting that different anecdotal reports of 5-MeO-DMT use differ significantly in terms of their descriptions of the effects that particular dosages bring on. While some people have reported that 30 mgs produces only threshold effects, others have reported being completely overtaken by as little as 5 mgs. These drastic variations could be due to physical differences between individuals or variations in substance purity.

In order to maximize safety, it is recommended that potential users of 5-MeO-DMT start dosing themselves at the low end of the spectrum (2-6 mgs) before attempting higher dosages. As discussed earlier, even low doses of 5-MeO-DMT can occasionally produce extremely overwhelming effects.

When ingested together with a MAOI, 5-MeO-DMT is O-demethylated by CYP2D6 and becomes Bufotenine in the liver, but without a MAOI, it is mostly N-Demethylated by MAOI into 5-MeO-Indole-acetic-acid (Shen et al 2010; Ai-Ming 2008).

There is some concern regarding taking 5-MeO-DMT orally, specially with a MAOI. There has been at least one reported death (Sklerov, 2005; Callaway 2006), and some hospitalizations. This might be due to individual metabolic differences. Check this thread for more info. If you are consuming 5-MeO-DMT orally for the first time, specially with MAOIs, start VERY low and raise your dosage gradually.

General For info on DMT safety, please reffer to Health and Safety tips regarding set and setting, how to integrate and so on, as written for DMT, are also relevant to 5-MeO-DMT

The alkaloid information about Acacia coming from TLC analysis is not to be considered definite. They are tentative identifications that need to be confirmed with GC-MS or other appropriate analytical methods. (ref Trout's Notes)

Acacia auriculiformis Trace amounts tentative ly ()bserved in stem-bark (25 April 1995). tic by J. Appleseed 1995 (A band at this Rf was also seen in roots [mislabeled as Guaiacuml in 2 Sept. 1994 assay but used Ehrlichs reagent which does not differentiate between DMT and 5-MeO-DMT.)

Acacia maidenii Traces observed in wood (October 1995); Observed in twigs (26 July in phyllode and in mixed phyllode and twigs 27 Oct 1995) tic by J. Appleseed 1995 (Xanthydrol) Co-occurring with suspected DMT in all samples of phyllodes and twigs but sole alkaloid seen when just using twigs. Not observed in bark or root bark. Note: Acacias such as this one do not produce leaves except when young or stressed. What are thought of as being leaves are actually phyllodes; a specially modified petiole (the short stalk at the leaf base.

Obtained from the Waica by George Seitz. 5-MeO-DMT was the major alkaloid. Bufotenine was present as a minor component. Because of this, the claimed plant source (Virola) has been questioned. Holmstedt 1965 Many snuff using people use both snuffs, although many have preferences one way or the other. While idle speculation; we wonder if preparation might not have involved both plants, or if the snuff witnessed as made from one source ( Virola) may not have been contaminated with residuals of ano ther snuff (Anadenanthera) during processing or storage, in- volved the admixture of other Myristicaeaous plants or as-yet unidentified plants, or perhaps have been derived from an ·altogether different but as yet un- known source.

Snuff prepared, by the Pix.asi-teri (or Bisashi-teri) of Upper Orinoco, from the seeds of an Anaden.anthera species. 5-MeO-DMT [with Bufotenine) Marini-Bettolo eta/. 1964

5-MeO-DMT appeared potentially present in at least some specimens of one Bromus sp. (B. breviaristatus) 1996 tlc by J. Appleseed. Species was grown by Giorgio Samorini from seeds provided by Trout and identified at seed maturity by Dr. F. Festi in 1999. (Ref Trout's Notes)

(May 1995 assay). No alkaloids were observed iu this species until after it was 2 years old. 5-MeO-DMT was observed in small amounts in roots and also in stems (May 1995); Also in leaf Feb. 1995 (using large red leaves left from winter) and May 1995 using normally colored new but full sized leaves. Leaves also tested positive (faint) in Nov. 1995. tlc by J. Appleseed using Xanthydrol. (Ref. Trout's Notes)

cited HsU 1970 [Source article has not been located. Title is suspect.]

Leaf (dry) sampled 2 Nov. 1995 showed a faint blue band that co-chromatographed with 5-MeO-DMT. Plant from LER. TLC by Applesecd 1995. (Xanthydrol) We wonder if the above might not actually be the same alkaloid as McKenna observed rather than 5-MeO-DMT. While TLC has indicated DMT traces in this SAME plant, this was our only sampling to show this compound and no DMT.

Lespedeza bicolor Our assays did not detect any alkaloids in any parts during the first year. ( 1994) We did detect 5-MeO-DMT in both seeds and mixed seeds and pods. (May 1995) tlc by J Appleseed. See comments under DMT as we may have mistaken the two as tlc used Eh.rlichs (Ref Trout's Notes)

tlc by J. Appleseed 1995-6 (ref trout's Notes) [DMT did not start to show up in assays until after second year, at which time it was present in leaf and root.]

Mimosa tenuiflora (Willd.) Poir. The listing of 5-MeO-DMT is in error. Meckes-Lozoya ran it as a pure reference sample only.

Phalaris data below is incomplete. Alkaloid concentrations and proportions are highly variable from year to year and show dramatic seasonal fluctuations. Concentrations between plant parts and first growth versus regrowih are also very different. In many populations there may be marked differences in both the amounts present and in actual alkaloid profile from one plant to the next. (i.e. plants in the same population and arising from the same seeds may show completely different chemistry, not simply differing concentrations.) See the amazing Festi & Samorini pieces listed in the Phalaris spp. page about cultivation for a review and overview of what is known so far.

tetrahydro-beta-carboline. (From highly diverse source population used in plant breeding and genetic studies at the University of Minnesota. Department of Agronomy and Plant Generics".)

Snuff and other products from unidentified Virola.

al. 1971b reported it was more common in psychotics than normals (ref Trout's Notes)

Any typical extraction teks for DMT should potentially extract 5-MeO-DMT (but it will also extract DMT together). For separating 5-MeO-DMT from DMT, still no fail-proof method has been developed. Column chromatography will work using acetic acid as an eluent and silica as mobile phase. DMT will elute first (Rf 0.5), then 5-MeO-DMT (Rf 0.6) and bufotenine last (Rf 0.65) (De Bukowski 1974 ref Trout's Notes)

5-MeO-DMT is around 5 times more potent than DMT by weight.

Oral, according to Jonathan Ott, 30mg are active without the need for MAOIs. Mixing with MAOIs, it will be 3 times stronger, so a dosage will be around 10mg. There is some concern about 5-MeO-DMT's oral ingestion safety, and it might be related with individual metabolism differences. Check this thread for more info. If you are consuming 5-MeO-DMT orally for the first time, specially with MAOIs, start VERY low and raise your dosage gradually.