Distribution: Acacia karroo is geographically the most wide spread species in southern Africa. The species is present in every country in the Southern African Development Community (SADC)except for Tanzania where it is replaced by the taxonomically similar Acacia seyal[1] 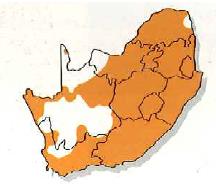 Habitat: A highly tolerant species as illustrated by the broad geographic distribution. Grows adequately in most soil types and out of all the South African Acacia species it is the most tolerant to low temperatures [2]

Bark: Bark exhibits a colour range varying from dark brown to almost black. The texture is rough and flaky, with a reddish under-bark sometimes visible.[3] Bark is longitudinally fissured with smaller branches (<50mm) having a pale-grey to rust-reddish colour variation[1]

Flowers: Flowers are deep or golden yellow pom-pom like[3]

Bark decoctions are taken as emetics for ailments believed to be caused by sorcery.