Difference between revisions of "Harmalas Extraction and Separation Guide"

Here's how you can get pure harmala alkaloids with food-safe materials.

For having purer product, redissolve in hot water, and repeat steps C, D and E a couple of times 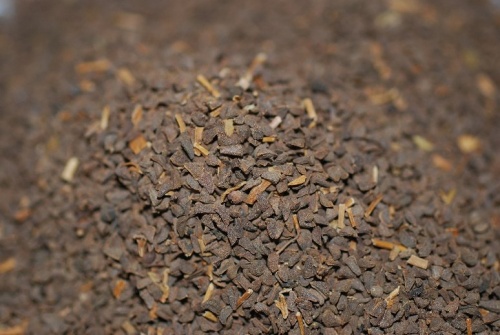 Grind rue seeds in blender or grinder (for the making of this guide 200 grams were used, but adjust to your desired quantity). If you freeze the seeds beforehand, they will be easier to grind.

Boil for half an hour in water with a little dash of vinegar. No need to be exact with amount of water, just dont use too little that it forms a thick syrup, better give a bit more water space for the alkaloids to move out to. 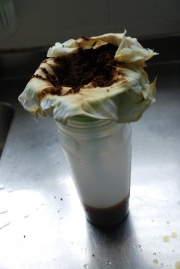 Pour the water out and keep it in a separate container, filtering in some very coarse filter such as very loosely-put cotton on the bottom of a funnel or even better an old tshirt/cloth.

Put the seeds back in the pot, with more fresh water and dash of vinegar, and repeat steps 2-4 for a total of 3 or 4 times.

Filter in a funnel with cotton plug. Be patient, it may take some minutes. It goes faster when there is a lot of liquid in the funnel to press down on the rest. If its taking much too long, filter again once or twice through a coarser cloth filter or dont pack the cotton plug so tightly.

Put filtered liquid back in the pot to reduce in low fire. If you had, say, 4 liters of filtered rue tea, reduce to 1l so that its more manageable later.

After reducing, filter again like in steps 6 and 7 because more solid impurities will have appeared in the process of reducing.

This time you want to keep the alkaloids so you have to use a finer filter that wont let the alkaloids pass, like a cloth or cotton might. Therefore, has to be like a coffee filter and this step may be slower. Some shortcuts can be made which is to use a vacuum filtering system, and if one cannot afford a propper one, it can be improvised at very low cost, or adapting a paper filter in a french coffee press.

If you use lye, it will make for an easier filtering. If you dont want to use lye, use sodium carbonate.

''' This is a mix of harmaline and harmine + some unwanted alkaloids, vasicine, deoxyvasicine and vasicinone. They will be removed later on during step 12'''

Filter a couple of times with coffee filter. Now there are less impurities, so using a fine filter like coffee filter, a few times, will help getting more and more rid of the finer impurities too. Your alkaloids should be dissolved in the liquid so any solid/color that stays in the filter is impurity. A coarse filter would not be enough, needs to be coffee filter or even two stacked up. The colours change beautifully from the yellowish salt precipitation to the clear reddish colour when redissolved.

Decanting the rue tea after having added the salt, when one adds a lot (200g/l). Notice the salt that stays behind. When adding 100g/l the brew stays transparent after all salt is dissolved, and takes hours to start precipitating

Saturate the solution with salt. Have the tea boiling in a pot, and add 100-120g salt per liter of water. Let it cool down to room temperature slowly over the next couple of hours, and then you can stick it in the fridge. After 3-5 hours, the harmalas will have crystallized. If you add more salt (closer to 200g per liter), the harmalas precipitate faster but less pure and more powdery than crystally.

What is happening here is that with excess of salt, the harmalas get the Chloride ions from salt and precipitate in the salt harmala form, harmine and harmaline HCl, which are insoluble in salt saturated water therefore precipitate. In this step one removes the uterotonic and possibly more toxic alkaloids vasicine and vasicinone, dangerous specially for pregnant women because they are abortifacient. Analysis done by Shulgin and others have shown salt-precipitated harmalas to be indeed free of these mentioned alkaloids. 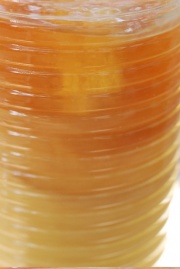 Picture of the harmala salts precipitating in the second or third round. Notice the lighter precipitating alkaloids and the yellower liquid.

I recommend repeating the steps 10-13 at least 3 times. I also recommend always doing in this alternating order, precipitating the salt, then redissolving in warm water, precipitating the base, redissolving in warm acidic water, repeat again, until its clean enough for you. In the first runs it is a darker brown, and then it gets progressively lighter yellower, like in these pictures:

''' For keeping the mixed harmalas, read step 16, for separating harmine and harmaline, go to step 17'''

Slowly add a sodium carbonate saturated solution to your dissolved harmalas. As you add the sodium carbonate solution, you will see the harmala solution changing color. Keep adding slowly until you see no more color change. Let the harmalas precipitate over a couple of hours in the fridge, decant/filter with coffee filter, dry them up and you're ready to go :)

Or if you want to separate harmine from harmaline:

This step is only if you want to separate harmine and harmaline. For this process we use the difference in their pKa, which is basically the measure that says at a certain pH, how many of its molecules will be freebase or in salt form. Harmine becomes a freebase in a pH where most harmaline is still salt, so one can separate them. If you have accurate pH meter, at pH 8,75, 92% of harmine present in rue will precipitate while only 8% of the harmaline present will precipitate. Add sodium carbonate saturated solution till pH 8,75 or add sodium bicarbonate saturated solution freely till it stops changing colour and a bit more, to precipitate harmine. Wait at least half an hour and filter with coffee filter, and add sodium carbonate freely to precipitate harmaline. Wait at least 2 hours and then filter with coffee filter to retrieve your harmaline. Note that depending on the original ratio of harmine and harmaline, there might be considerable amounts of harmine in your supposed harmaline. Check this thread for more info. If one really wants mostly pure harmaline, one can redissolve the harmaline and again precipitate with same selective pH, and the first precipitation will be most of the harmine and the second will be purer harmine. Dry and enjoy :)

The more one repeats the whole process, the cleaner the alkaloids get. I recommend repeating and alternating a few times between the salt precipitation and the freebase precipitation, with more runs on the salt than on the freebase. The reason for this is because even at a high pH, it is possible that a small quantity of harmaline still does not precipitate, so every basing could lose a small amount of it. It might not be such a significant quantity but maybe if one repeated many many times one could lose some alkaloids. One could make for example 3x salt precipitation, 1x base, again 1 or 2x salt and 1 or 2x base. If one does this, this is what happens:

And after one or another clean up run, the final products can be such as this: