Acacia confusa is a perennial tree native to South-East Asia and containing high concentrations of psychoactive tryptamines in its root bark. It appears attractive for use in ayahuasca analogs[1], though at this point, experience with such preparations remains limited. Some local names include Acacia Petit Feuille, Small Philippine Acacia, Formosa Acacia (Taiwan Acacia) and Formosan Koa. The tree has become very common in many tropical Pacific areas, including Hawaii, where the species is considered invasive.[2] 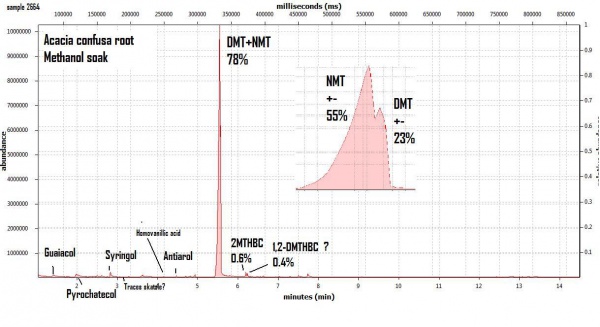 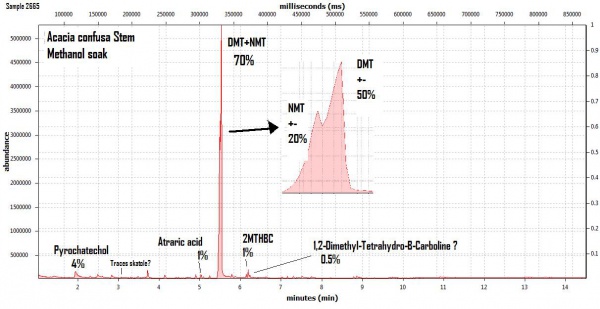 No alkaloids are found in the phyllodes (leaf-like structures).[3]

The seeds are considered poisonous and reported to cause headache upon ingestion. [4]

Little research has been done, but successful ayahuasca preparations[5][6] and direct oral activity[7][8] using the root bark (and possibly, ordinary bark) have been reported.

The psychoactive tryptamines extracted from Acacia confusa are described in a number of publications. [9]

The plant is considered medicinal in Taiwan.[10] (The same publication reports it as toxic, without providing further details.)

Online excerpts from Chinese medicine books (precise references are not given) state that the root can be used for detoxification, treating larynx and windpipe inflammation and liver disorders. (Original Chinese text: 根有清热解毒、解暑发表的功能。可用于治疗咽喉肿痛，黄疸性肝炎及慢性气管炎等。)

Positive outcome has been reported for applications of Acacia confusa bark extract to combat the liver toxicity of carbon tetrachloride in rats. [11] Goat foraging on the plant has been observed. [12]