The botanical name is derived from the Greek anastomosis Italic text(formation of a network), in allusion to the reticulately nerved phyllodes.

Seeds (immature, few seen) oblique in the pods, seated in shallow but distinct chambers each separated by a narrow septum, ellipsoid; funicle-aril fleshy, white and narrowly turbinate, the funicle straight or sometimes convoluted

Occurs in the Kimberley region of northern Western Australia where it is known only from south of Kalumburu. 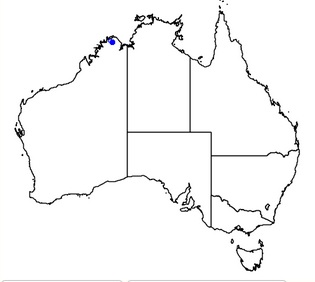 Because of the paucity of collections it is not possible to determine an accurate phenology for this species; however, three specimens with flowers at anthesis have been collected, one in April, one in late May and the other in mid-June. The one known fruiting collection, with aborted and seemingly recently-dehisced pods, was collected in mid-October. This species therefore probably flowers at the end of the wet season and into the early dry season with fruit developing from the middle of the dry season