Difference between revisions of "5-MeO-NMT" 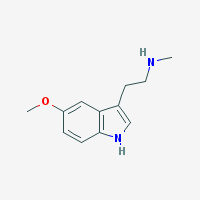 Brief overview - What is 5-MeO-NMT?

5-MeO-NMT is an alkaloid of unknown psychoactivity

5-MeO-NMT is believed to produce few or no psychedelic effects, although very little data exists about its pharmacological properties or toxicity.